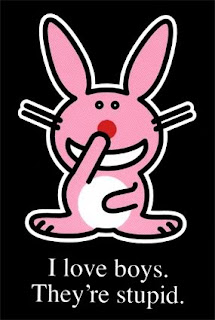 Have I mentioned boys are stupid?

So the boy I just broke up with a couple weeks ago is apparently not familiar with the terms of the "clean break" I suggested. Or maybe in his mind sending me text messages does not constitute actual contact as there is no face to face, or voice contact. Really, I don't know. So anyway, after getting several "hey how's it going?" I got annoyed and, rather than telling him to take a hike, asked him exactly what was "too independant" supposed to mean? (I know, dumb move. It was bugging me ok? Seriously, most men WANT a woman who is not clingy or needy. Just my luck I get someone who needs someone needier than he is). So he has the nerve to tell me that I am too closed off, and am afraid to let anyone close to me, and implied that not only am I unable to be in a serious relationship, I am also an emotional cripple... -deep cleansing breaths, deep cleansing breaths, deep cleansing breaths...

My darling pink cell may have taken its maiden voyage across the room after I read that one. Serves me right for not just ignoring the guy. Lesson learned. No further contact. If I want an educated opinion of myself I'll get my girlfriends drunk and ask them.

So anyway, not 2 days after I broke it off with Mr. Velcro do I get a text from this guy I had dated briefly in the summer, had a lot of fun with, and it never really ended exactly, but we just kind of lost touch when I had to go out of province for work and he had some kind of seminar in Toronto. Anyway, this one is all about having fun, not getting boring, and has the cutest ass I think I've ever seen. And we're getting together this weekend.

Things are looking up.

So tomorrow is Black Friday. Yah, I know, I'm Canadian, we don't have Black Friday here. But in a fun way we do, because all the stores here do something magical sale-wise in order to deter dumb Canadian shoppers from driving through feet upon feet of snow, over ice-covered highways, and through hostile border crossings in order to save the equivalent of a few bucks once you factor in gas, hotel, and the greasy fried fare that seems to be de rigeur in American restaurants...
Posted by oh, that girl... at 9:37 AM

oh, that girl...
I'm that girl - the one trying to balance singlehandedly raising a 10-year-old girl with maintaining some semblance of a social life, who feels that shopping is, in fact, cardio, who sings loudly and painfully off-key in the car while flipping off the slow drivers, and is convinced that one day soon she will marry a Detroit Red Wing and live happily ever after... a girl can dream...