I seem to do a lot of stupid shit.  Today, for instance, as I was getting ready for a meeting, and choosing my accessories (it's a fashion company, this is how I get ready for meetings), I decided on this amazing ring I bought on my last trip to Cancun.  It's a stainless steel square band with a small clear stone set in it, and looks very much like a very cool men's wedding band, but is clearly a women's ring, as it is a size 5 and even the men in Mexico don't have that small of fingers.  At least I hope not, for the sake of all Mexican women...  Anyway, when I spotted it, I immediately fell in love with it, and upon trying it on discovered the only finger it fit was the ring finger on my left hand.  After much deliberation I decided to buy it anyway, but have barely worn it since, as I feel awkward wearing a ring on my  left hand that looks like a wedding band and I so don't want people to think I'm that girl...  you know the kind I'm talking about.  So anyway, back to this morning.  I take it out of my jewelry box, and decide what the hell, I've lost weight lately (10 pounds of being sick, 5 pounds of breakup - I don't eat when I'm depressed - I'll never be the fat ex-girlfriend), let's see if I can get it on my RIGHT hand.  And I did.  Unfortunately my finger seems to have swelled up since this morning, and now, after a vigorous effort involving olive oil, butter, and a lot of screaming and swearing on my part, the ring appears to now be fused onto my finger. 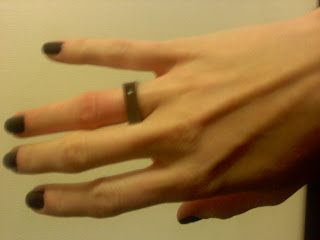 Notice the angry red swelling and chafing.  It hurts like a motherfucker too.  Great ring though.

If I get the damned thing off it's staying in my jewelry box.

oh, that girl...
I'm that girl - the one trying to balance singlehandedly raising a 10-year-old girl with maintaining some semblance of a social life, who feels that shopping is, in fact, cardio, who sings loudly and painfully off-key in the car while flipping off the slow drivers, and is convinced that one day soon she will marry a Detroit Red Wing and live happily ever after... a girl can dream...